Posted by chris macrae at 7:00 PM No comments:

eg chris.macrae@yahoo.co.uk - Glasgow
when we will three meet again, in thunder lightning or in rain
when the hurly burly's done, when the battle's lost or won
and i hope in these times webster wont mind me copying their explanation of juliet's question
wherefore art thou?

Language is democratic—we vote with our words. Just as new words come into the language when we have new things to name or new concepts to describe, old words can drop from use. This usually happens for the opposite reason: an old technology is no longer used or the conception the word described has changed: yesterday’s aledraper is today’s bartender. Sometimes a word drops from use because of potential confusion. Language has a natural prejudice for clarity (usually, at least), and it’s easy to see why wherefore has an archaic ring to it. We know it best, of course, from Shakespeare’s Romeo and Juliet: 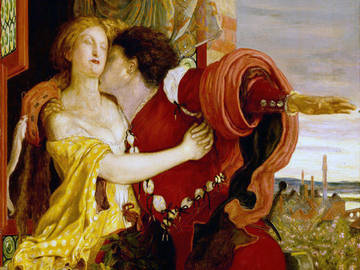 Juliet isn't asking where Romeo is—she's asking why he's Romeo.
Because of the base word where, modern ears often interpret this line as asking the question: “Where are you, Romeo?” In fact, it’s asking, “Why are you Romeo?” The following line gives us a clue:

Deny thy father and refuse thy name.

Since what kept the lovers apart was their feuding families, they could be together without impediments if he had a different name. Why was he Romeo? (Indeed, a few lines later, Juliet asks, “What’s in a name? That which we call a rose/By any other name would smell as sweet.”)
The fact is, adding prepositions to where was an unusually productive way to make words in English. Some of them are still used today:

Others have fallen from current use:

In these compounds, where meant “what” or “which,” so that, for example, whereon meant “on what” and wherein meant “in what”—and wherefore meant “for what,” or “why.” Shakespeare used it in other plays as well:

But wherefore do you droop? why look you sad?—Shakespeare, King John, Act 5, Scene 1

Wherefore was I born?—Shakespeare, Richard III, Act 2, Scene 3
If wherefore is distinctly archaic as an adverb, it continues to be used as a noun meaning “reason” (a synonym of why when used as a noun), and nearly always in the phrase (that we now understand to be perfectly redundant) “the whys and the wherefores.” The phrase goes back at least as far as 1640:

Ile have my celler lockt, no schoole kept there
Nor no discovery, Ile turne my drunkards,
Such as are understanding in their draughts,
And dispute learnedly the whyes and wherefores,
To grasse immediatly, Ile keep all fooles,
Sober or drunk, still fooles, that shall know nothing,
Nothing belongs to mankind, but obedience,
And such a hand ile keep over this husband.—John Fletcher, Rule a Wife and Have a Wife, Act III, Scene 1

Now, should you ever have to pause to think about the word’s meaning when you encounter wherefore in a text, at least you’ll know why.
Posted by chris macrae at 8:09 AM No comments:

Mar 30, 2020 - Shakespeare Wrote Three of His Famous Tragedies During Turbulent Times ... He was working in London when the bubonic plague surfaced in 1592 and ... no personal letters, though there are clues to be found in his plays.
Posted by chris macrae at 9:19 AM No comments: