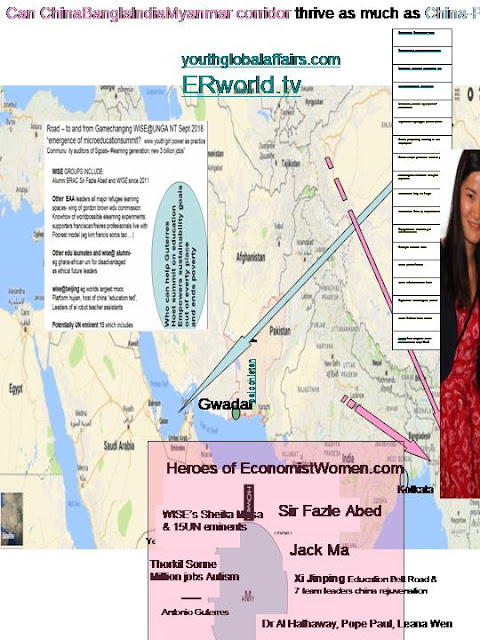 2 of the most vital belt road corridors illustrate how valuing refugees is critical to sustainability of that region- note the corridor east of india-china-bangladesh-myanmar-asean; currently with 1 million refugees at myanmar-bangladesh border

w99 William Edwards Deming ( statistician , electrical engineer, management consultant) couldn’t find enough work in post-war . He went to  which united around his passion to produce things with next to zero defects. This pursuit of quality systems helped  develop from the failed and beaten eastern nation of world war 2 to the second largest economy by the 1970s. (see The Economist 1960s series of surveys Consider Japan).

Deming is especially significant to both economies and societies which are humanly interested in designing systems that develop people. While there is no standard definition of the term post-industrial, in our sino-english book of World Record Jobs Creation: we search post-industrial networking which multiplies win-win trades in at least one of 3 ways- win-win across places, win-win across generations eg towards renewable energy and zero waste, by growing peoples skills and livelihoods. Quality systems were essential to progressing the communications technology age through a moores law doubling every 7 years from 1946 to 2030 first called the hi-trust economic networking genre of entrepreneurial revolution by norman macrae at the time of the moon landing

Without japans contribution, development in computing- let alone space races - would have been delayed as would such citizen developments as supertrains.  led the race to minaturisation which used ever less energy per unit of calculation or communication. More generally  started the eastern hemisphere  world trade dynamic of win-win innovation which at its best : ended colonization, pursued peace, translated happily energising cultures, and designed trade around communally improving the human lot. It is partnerships with the east that have driven the most miraculous systems designs for ending poverty and sustaining better livelihoods of all our next generations. While Japan’s economy eventually got trapped in property speculation in the 1980s, win-win trades out of asian pacific superports mainly operated by the Chinese diaspora turned these peoples into the 3rd wealthiest financial services network by the mid 1970s. They were invited to inwardly invest their win-win infrastructure technologies as well as this wealth and smart mediation in mainland china. The greatest job creating miracle was born and today through such extraordinary servant leaders as E1 Xi Jinping and the CPC19 charter of evolving moderately prosperous societies offers upwards of 100 national leaders simultaneous maps for designing the sustainability generations win-win trades and open  learning economies.

Back in Deming’s day: Electronics calculating devices as one signature new-quality driven market enabled statisticians to take on big data sets the like of which would previously have been impossible to conceive let alone analyse.

Where will quality technology exponentially lead?
Technology is neutral . It doesn’t necessarily design win-wins unless humans -girls and boys - do. What IT now does simultaneously around mother earth is: opening the door to such tipping point possibilities as Big Data Small analysis which can offer extraordinary opportunities when bridging the pre-digital and post-digital  generations of being (see E3 Jack Ma).

In parallel, we observe that while shifts to service economy can advance win-wins they don’t necessarily do so even when a post-digital age with universal mobile distribution provides the opportunity to replicate apps anywhere at almost no extra cost per community reached. Leapfrog models need to be celebrated by youth as the greatest people-growth innovations ever marketed where this new economic opportunity is applied preferentially to communities that the industrial age left out. Jack Ma has invited Japan to take such celebrations to new heroic levels as first host of the Olympics mainly sponsored by ali baba instead of Coke.
Women may bear witness to how mobile phones result in extraordinary apps when partnering bangladeshi village mothers who previously had no phones nor literacy and only face to face communication. ’s underemployed girl population were also the first to scale microsolar precisely because of the value this brought to rural places that had never had access to electricity grids.

In the pre-digital village networking era, which  as 8th largest and most poor nation engaged as a new nation in 1971, microfranchising was one of sir fazle abeds unique innovations. This open sources a solution a community needs to be locally sustaining. As Sir Fazle says the hallmark of all service franchises triangularises  the 3E's Effective ( solves a vital service need), Efficient ( continuously improves to be uniquely sustain best quality at the most responsible price), Expandable ( replicable to every community with similar life shaping need). Microfrencahsies designed from the bottom-up multiply levels of value exchanging transparency that top-down planners however expert their functions could not verify in real time dynamic detail even if they wanted to.


And of course like any win-win franchise training model microfranchises need to be designed conscientiouly around  a positive income model. But and this is a defining but, the microfranchise does not use positive income to reward some group of owners with no interest in the community development goal; it does use the positive income to continue linking in a service purpose which the world would uniquely miss if this microfranchise did not exist. And to turn any change in the environment - technological or cultural - into a win-win.
The pre-digital culture of poorest village girls networking around microfranchises made of bangladesh, after just quarter of a century, the most heroically human partnership labs for every leap in learning and communications technology. Of course  did not enjoy the levels of diaspora investment that its “girls lift up half the sky” friendly giant neighbor China did. But it has become one of the great spaces for partnerships with girls to innovate solutions to the "Ultra" sustainability challenges our race faces every day until goal 1 of ending being born into poverty is won by girl empowerment of all the worldwide communities of 21st C life

Let us summarise the two reasons why sir fazle microfranchise innovations offer the best news humans have ever interacted.

First ,prior to knowing about BRAC’s microeconomic model, most service businesses even in the market for aid were not  designed so that human growth and value stays with each local team and community served. Worse as the West raced toward global corporations in service industry, the systems monopoly standard of accounting refuses corporations to value advances in peoples training because this dismal logic argues that companies can only count investments they own not people free to change employers; in such industrial age accounting training processes are counted as costs.

Second, BRAC's brand DNA has always been as an action learning organisation inspired by Paulo Freire’s idea- go live in the deepest middle of the very poorest to prove how innovative a professional practitioner can wholly be. In other words, for anyone who believes that sustainability goals ultimately test what educational systems humans are capable of celebrating, going to learn with BRAC is the most inspiring adventure imaginable, and dare parents around the world promise:  the truest one for anyone who advocates that girls and boys are economic equals.

World record jobs creation –and people-friendly globalization 2.0 -  urgently needs to examine professional monopolies wherever their congresses and academic gurus rule over  zerosum maths. We need to leap beyond tangible accounting monopolies that falsely devalue intangibles such as trust and Loveq; macroeconomic consensus that externalizes zero sum and less onto already weakest localities are terifying because they are  exponentially preventing the growth of people from baby girls up.

Ironically the industrial age started by English-speaking bosses of the 1700s , ie stuff which multiplied by what can humans do with machine power, all too often spiraled into impacts that were zero-sum or less wherever it enslaved or colonized, went to wars over who had access to consuming the most carbon, designed numbers economics and short-term reporting (including scary media) round zero-sum instead of way above zero-sum value exchanges.